Utah is performing an experiment with 10-hour workdays as a way to save energy costs and reduce employee time wasted commuting.  I think this is brilliant, but not for the reasons most people think.  Having employees work only four days a week is completely unacceptable in my book.  But having them work longer hours is pretty smart from the PHB perspective.  The longer hours put into work means less work the PHB has to do.  Shifting workload is a decidedly good thing.

The workweek alteration experiment should be carried to its logical conclusion.  Twelve hour (or longer) workdays would be ideal.  That way the employees could commute in two hours earlier than everyone else and leave two hours later.  This would cut down their commute times because there would be less traffic on the roads at 6 a.m. and 7 p.m.  If we further extend the workweek to be every day instead of just five days a week, further improvements could be realized.  Mondays and Fridays are always the least productive days for employees.  At the beginning of the week, they need to get back into the work flow after time off.  At the end of the week, they're in their "getting ready for the weekend" mode.  If we eliminate this gap of non-work, productivity will go up.

It's high time we changed our strict 9-5 M-F work schedule.  Playing around with increasing those hours and days could realize lots of benefits for your company.

Posted by Joseph M. Scandura at 4:50 PM No comments:

I've seen it all now.  There are now dogs that commute from the suburbs to the metro center and back again.  They hop on the train from the suburbs and ride into the city center.  They've learned to get off at the right stops so that they can take advantage of the more plentiful food scavenging in the city.  After a day of begging, yapping, and cleaning up dropped food, they hop back on the train and ride back to the burbs.

Now if only we could find some way to train them to come into work.

In a dangerous precedent, employees at T-mobile are suing for being on call after work.  Have you ever heard of anything more ridiculous?  They were hired to do a job, and sometimes after hours tasks will be required.  I expect my employees to answer my calls immediately whenever I need.  That's part of the job.  If their lazy asses don't want to answer my calls because of unimportant things like dinner or their not being "at work," then that is certainly their prerogative; and it is my prerogative to fire them for not being available at my whim.

The world works on a 24/7 schedule.  Being connected at all times to the workplace is a reality.  If employees have to be given time away from work, businesses will surely fail.  Wanting overtime pay for regular work expectations sounds like whining from lazy and greedy workers.  Next thing you know, they're going to want to be paid for doing nothing.

Posted by Joseph M. Scandura at 4:35 PM No comments:

The positives of negativity

Counting your blessings isn't necessarily the best way to improve your positive vibes.  I always thought that phrase was an irritating truism uttered by annoyingly perky, holier than thou goody two shoes.  It turns out that my opinion isn't too far off from the truth.

The half empty/half full debate isn't the important point in improving your outlook.  Instead, it's about contemplating what would happen if the glass was already completely empty.  The negative thought experiment ironically makes you feel better about your less than ideal current situation.  In the case of the pointy haired boss managing slacker employees, you can lower your blood pressure over insufficiently productive employees with this negative imagination exercise.  Imagine how even more unproductive they would be without you prodding and goading them (i.e. managing) them.  Heck, the grunts probably wouldn't do any work at all without your PHB hand guiding them.  Learn to appreciate your positive influence by imagining the worse consequences of you not being such a good PHB. 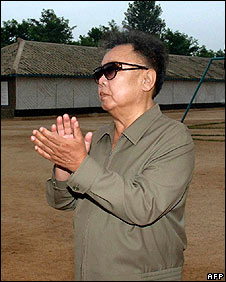 If you've been paying attention to the news recently, you'll no doubt have heard about Clinton's trip to N. Korea to free two American reporters and Webb's trip to Myanmar to free the loon who swam to Aung San Suu Kyi's mansion.  The government invariably screws up anytime it interferes where it shouldn't be. Those idiots got themselves into international hot water, and a lot of time and resources were unnecessarily wasted getting them out of their self-created mess.

On the flip side, the governments of N. Korea and Myanmar made huge gains from the events. By getting the U.S. to come out and deal with them diplomatically, they've established their legitimacy as regimes. So, what is the pointy haired boss lesson illustrated in these current events? Solidifying your legitimacy is a matter of controlling what others want and not giving into demands that weaken your position. When dealing with your workers, you control the purse strings which. Your underlings want to get paid from monetary resources you control; you act like a responsible PHB and make sure they're working for their paychecks. When you can force negotiations from other parties instead of letting them dictate the action, that instantly raises your relative position of power.

Posted by Joseph M. Scandura at 7:34 AM No comments:

Autism in its many forms causes numerous social problems for the people that are afflicted by it.  They often have trouble mingling with the the general public because they are perceived as not quite normal.  However, they can have intense and obsessive focus.  When that single-track focus is harnessed, they can be incredibly productive in a corporate environment.  One company is already hiring these underutilized workers and reaping the benefits.

I believe that this is a great recipe for PHB success.  You can let the autistic employees work relentlessly for you and not really have to interact with them because they don't particularly like social interactions anyhow.  And you never have to worry about them leaving the company either.  Their social awkwardness makes it nearly impossible for them to be employed anywhere else.  You in essence get a relentless worker who's bonded to you, and they get a job that they wouldn't otherwise have.  It's a win-win situation all around.

Posted by Joseph M. Scandura at 3:35 PM No comments:

How many people do you know who are tried for corruption charges six times and get off each time?  I only know of one person, and he's the focus of this PHB profile.  You can't get much more pointy haired bad ass than Sylvio Berlusconi.  The man rose through Italy's political ranks to run the country and used his PHB prowess during his ascent.  Charges of tax fraud, bribery, corruption, false accounting, and embezzlement have been brought against him by numerous parties.  But everything just bounced off of him and never stuck.

Even more amazing is his bold ability to use his power and influence to have public affairs with women five decades younger than him.  Such infidelities would ruin most political figures, but not Sylvio.  He has the savvy to use his media empire to deflect the bad publicity and can even demand that his wife publicly kowtow to him for the accusations of infidelity.  That's the sign of a true alpha PHB, deftly wielding power and influence to his advantage.

Pointy Hair Pride gives its salute to you, Mr. Berlusconi.  You are a shining beacon to PHBs everywhere.

Posted by Joseph M. Scandura at 6:57 PM No comments:

The Downside of Positivity

For an important pointy haired boss, a crucial task is keeping the worker underlings under control.  Having uppity employees is a royal pain in the arse and a detriment to your PHB-ness.  Establishing your status as the alpha dog is of utmost importance.  Giving unreasonable tasks, criticizing for no good reason, etc. are all important tools in your worker control arsenal.

Some may argue that the negative approach lowers workplace morale and drops productivity, but that's just an uninformed opinion.  Recent research shows that positive reinforcement can actually be bad for people.  The positivity actually magnifies their realization of their lowliness and incompetence.  Positive reinforcement leads to false hope and eventually ends up being worse if you had kept them down in their place all along.

Posted by Joseph M. Scandura at 7:22 PM No comments:

Mailbin: Letter from the boss

LETTER FROM THE BOSS:

As the CEO of this organization, I have resigned myself to the fact
that Barack Obama is our President and that our taxes and government
fees will increase in a BIG way. To compensate for these increases,
our prices would have to increase by about 10%.  But since we cannot
increase our prices right now due to the dismal state of the economy,
we will have to lay off sixty of our employees instead. This has
really been bothering me, since I believe we are family here and I
didn't know how to choose who would have to go.

So, this is what I did. I walked through our parking lots and found
sixty 'Obama' bumper stickers on our employees' cars and have decided
these folks will be the ones to let go. I can't think of a more fair
way to approach this problem. They voted for change, I gave it to
them.

I will see the rest of you at the annual company picnic.

Posted by Joseph M. Scandura at 2:32 PM No comments:

Here at Pointy Hair Pride, we dig Sarah Palin.  She embodies the leadership qualities that every successful pointy haired boss should aspire to.  She's smart, well-spoken, decisive, charsimatic, and bold.  The liberal media is having a field day with her recent resignation, but in the end, it's Palin and her supporters that will have the last laugh.

Sarah Palin shows how much of a badass PHB she is by resigning the governorship of Alaska.  She already showed she can maintain the reins of power in the state while not actually being there.  She took off for a presidential election campaign and did what any good PHB would do: make someone else take care of things.  Sheer brilliance!  Now, she's outgrown the small pond of Alaska and needs to move on to bigger and better things.  Like a true point guard diva, she can pass the ball and leave the game anytime she wants.  The critics who say she's shirking her responsibilities don't understand that the boss can do whatever he or she wants.  That's part of being in power.  If she chooses to quit to do something else, that's her prerogative, and the only thing the lefties can do is whine.

After some well deserved R&R and perhaps some super fun aerial M16 hunting of some big game, I'm sure Palin will rise through the political ranks and prod our current lame duck president into sensible policy decisions.  She's rising through the ranks quickly, and I for one am inspired by this rockstar PHB.